Galloway, which has given its name to a valuable breed of black or dun polled cattle, was an ancient regality or lordship lying in the south-west of Scotland. The word is derived from Gallovid, which in old Scots signifies "a Gaul".

The last Gauls are said to have been the first inhabitants of this part of Scotland. The last of the line of rulers was Alan, Lord of Galloway, who is buried in Dundrennan Abbey in 1233. The title passed into the house of Douglas of Thrieve, and the whole district was finally annexed to the Crown of Scotland in 1455. 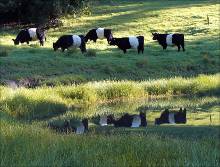 Galloways Australia actively promotes each of the Galloway breeds and the excellence of their products, eg beef and hides. Galloways are unique in that a host of breed association independent research has chronicled their excellence in beef eating quality, ease of beef marbling, ease of calving and calf survival rate, feed efficiency, ability to finish off grass and non selective grazing habit.

This promotion of the Galloway breeds is further enhanced by Galloways Australia's support of direct marketing of Galloway products and marketing hubs.

Useful Articles about Galloways in Australia