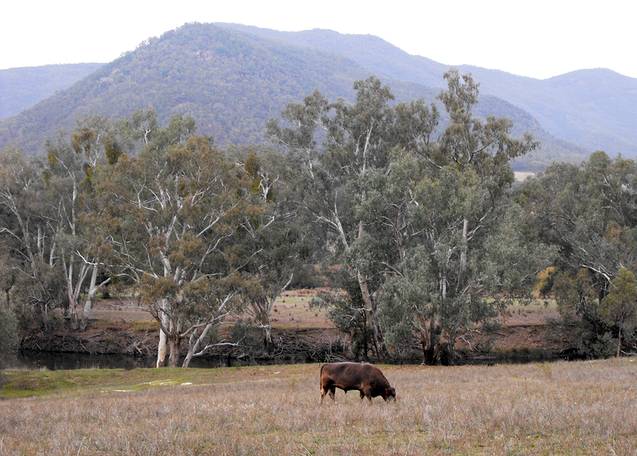 The Murray Grey breed was developed from an initial chance mating of a black Aberdeen Angus bull and a roan Shorthorn cow in 1905, during the Federation drought.

The resulting 13 dun-grey calves from these matings were kept as curiosities and then bred on the Thologolong property of Peter and Ena Sutherland (situated on the Murray River in the Upper Murray region of Victoria). This area is close to the Kosciuszko National Park. Temperatures have a seasonal range of 40 degrees C.

The first large scale commercial herds were established in the 1940's. In 1962, a group of cattle breeders held a meeting in the hotel at Walwa on the Murray River in Victoria, and as a result a Society was formed. Subsequently, breeder groups were established in New Zealand, the United Kingdom and the USA.

A later development was the breeding of the Greyman, a cross between the Murray Grey and Brahman. This has now become a recognised breed, and is used with Bos Indicus cattle in the northern and western regions of Australia to improve fertility, temperament and carcase quality.

The Murray Grey is a preferred choice for coping with temperature increases resulting from Climate Change. With a silver coat, they are less likely to suffer from heat stress, have outperformed black coated cattle such as Aberdeen Angus and with black skin, avoid skin cancer.

Structural correctness - after the Society was established in 1962, independent experts were employed to assess cattle and entitlement for registration.

For acceptance of Registration with the Murray Grey Stud Breeders Association, cattle are required to be structurally correct with breed characteristics including masculinity and femininity.

Colours - Coat colours are silver, grey or dark grey, with a black skin. The colour is dominant colour when crossed with another breed, evident from the odd Murray Grey from previous joining many years earlier, in a commercial Aberdeen Angus herd.

Temperament - Murray Greys are generally quiet, easy to handle and ideal for a new cattle breeder.

Calving ease - Calves are generally small and minimise the necessity for assistance in calving.

Before the advent of crossbred cattle, Murray Greys were, percentage wise, the dominant winners of carcase and taste competitions. For many years, they dominated these and hoof competitions.

Murray Greys produce a marbled beef carcase of a high dress-out percentage, with a consistent quality and tenderness.

In 1967, three Murray Grey carcases were exhibited at the Smithfield Show in the UK. They came first, second and third in the Commonwealth carcase competition. Similar success was obtained in the USA.

Murray Greys are largely unaffected by genetic difficulties which occurred in Aberdeen Angus following the import of genetic material from the USA.

Murray Greys from their humble, unintended and unexpected beginning have now spread worldwide.

It is fitting that these attractive cattle should have been nurtured by two Sutherland women in the shadow of the Snowy Mountains, where the legendary stockman of Banjo Paterson bravely rode. Both are part of our proud history.