Once rare, this hardy beef breed is increasing in popularity. English Longhorns are known for their docile temperament, great mothering ability and longevity. They calve easily and produce a high butterfat milk. 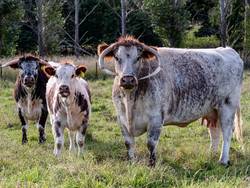 English Longhorns (or just 'Longhorns') originated in northern England. They were used as a source of milk (for butter and cheese) and as draught animals. Their horns were used in the manufacture of various household items such as buttons, cups, cutlery and lamps. When shaved into slivers, the horn was translucent and useful as a glass substitute.

Early herds were usually made up of individually owned cows, kept together on a common grazing area with the bull owned by the local landowner. These herds were long legged, narrow bodied and ideal as draught animals. 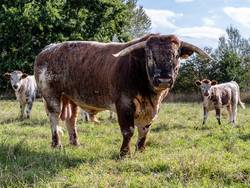 Robert Bakewell (1725-1795) was determined to improve the breed, with the intention of providing ample meat for the workers in Industrial Revolution fostered towns. He was revolutionary in the interbreeding science and crossed horned heifers and a Westmoreland bull, which created the Dishley Longhorn. This was later to be known as the English Longhorn.

Bakewell continued this interbreeding to improve the size and quality, featuring quick growth and bulky hind quarters. This led to the breed becoming popular throughout England and Ireland. 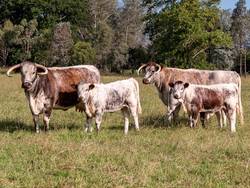 The English Longhorns' popularity declined after Shorthorns emerged in the 1800s. By the 1950s they were rarely found, due to cattle production being increasingly geared to high yield, close-quartered herds. Their long horns were unpopular due to injury potential in these environments.

Rare Breeds Survival Trust started work in 1980 to rescue the breed from extinction. They have fostered an interest in the Longhorn and other traditional breeds, which has seen an impressive comeback in grass-fed cattle breeding.

In recent years English Longhorn beef has become popular with celebrity chefs. The delicious beef has a velvety texture. 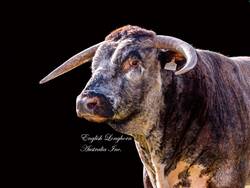 Recognisable by the large circular horns that curve into the nose area, the English Longhorn is a large, lean animal. Longhorns are brownish, red to grey in colour and have a white fur line known as 'finching' along their back and tail.

An attractive quality of the female English Longhorn is their ease of calving due to a roomy birth canal. Assisted birthing is extremely rare in this breed. Cows have a long lactation period and raise big healthy calves, continuing to breed to an older age than most other breeds.

Despite the impressive horns, Longhorns are docile. They are easily managed, long lived and inexpensive to feed.