About 500 AD, herdsmen who ran their cattle on small, widely scattered, rocky pastures had begun to develop a breed of red and white cattle from the native red Bavarian cattle.

These early cattlemen selected animals that could withstand harsh conditions and still produce meat and milk. Later in history, Pinzgauer attained their present form and colour. 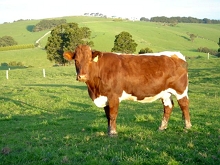 With the ultimate purpose of beef production, the Pinzgauer is viable as purebred or crossbred in the paddock.

Stock owners today are looking for increased production without adding excessive size and feed costs. Pinzgauers cross well with any other breed, maintaining their characteristic markings and traits. 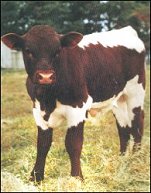 The most important factor in any breeding program. The Pinzgauer bull is a fertile, virile and ready worker over a long productive life. His mature weight reaches around 800 to 1000 kilograms. The docile nature of the breed makes it possible to keep older bulls without temperament problems getting out of hand.

The Pinzgauer female reaches puberty at between 305 and 340 days. This ensures that heifers will be cycling regularly when breeding season arrives.