The Kalahari Red goat was bred of native indigenous goats found in Namibia, as well as the Eastern and Northern Capes of South Africa and crossed with red coloured Boers. Farmers from all over South Africa were harvesting these native goats and crossing them and a breed was soon born.

The Kalahari Red was recognised as a separate breed of goat in 1998 and soon after the formation of the Kalahari Red Club on the 5th July 1999 in South Africa was achieved.

The Kalahari Red goat is a breed of goat with its own DNA markers, as proven and tested in 2004 by Dr Marida Roets at the Agricultural Research Council in South Africa. Farmers were concerned about the breed stemming from Boer goats, but the results of the tests showed that the difference between the Kalahari Reds and the Boers was greater than between the Boer goats and the African Savannah breed. The name Kalahari Red was given to the goats as the Kalahari Desert signifies their home in South Africa and the colour of the desert sand dunes.

On the 9th July 1999 Wallace Kier, Ray Anderson and Peter Firth, amongst other farmers, imported into Australia embryos from South African breeders and implanted them into does here in Australia. Bloodlines were expanded around the country as more farmers also started importing these embryos and live goats into Australia.

We now have stud and commercial farmers breeding up big numbers of Kalahari Red goats in Australia and keeping the bloodlines pure from fullblood bucks and does, all traced back by their bloodlines from Africa. KRGSA will be implementing strategies to expand and encourage more Kalahari Red breeders to build numbers and strengthen the quality of the breed as we maintain the demand for export and within Australia. 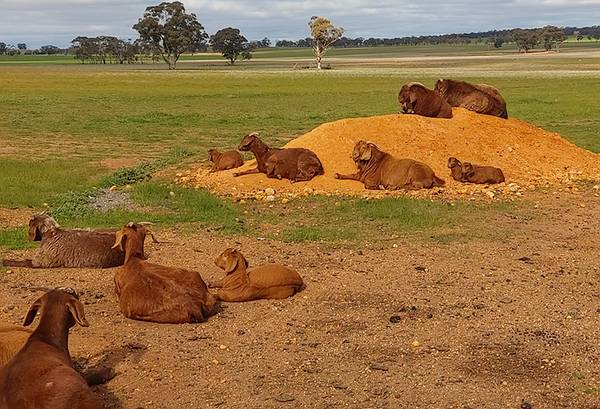